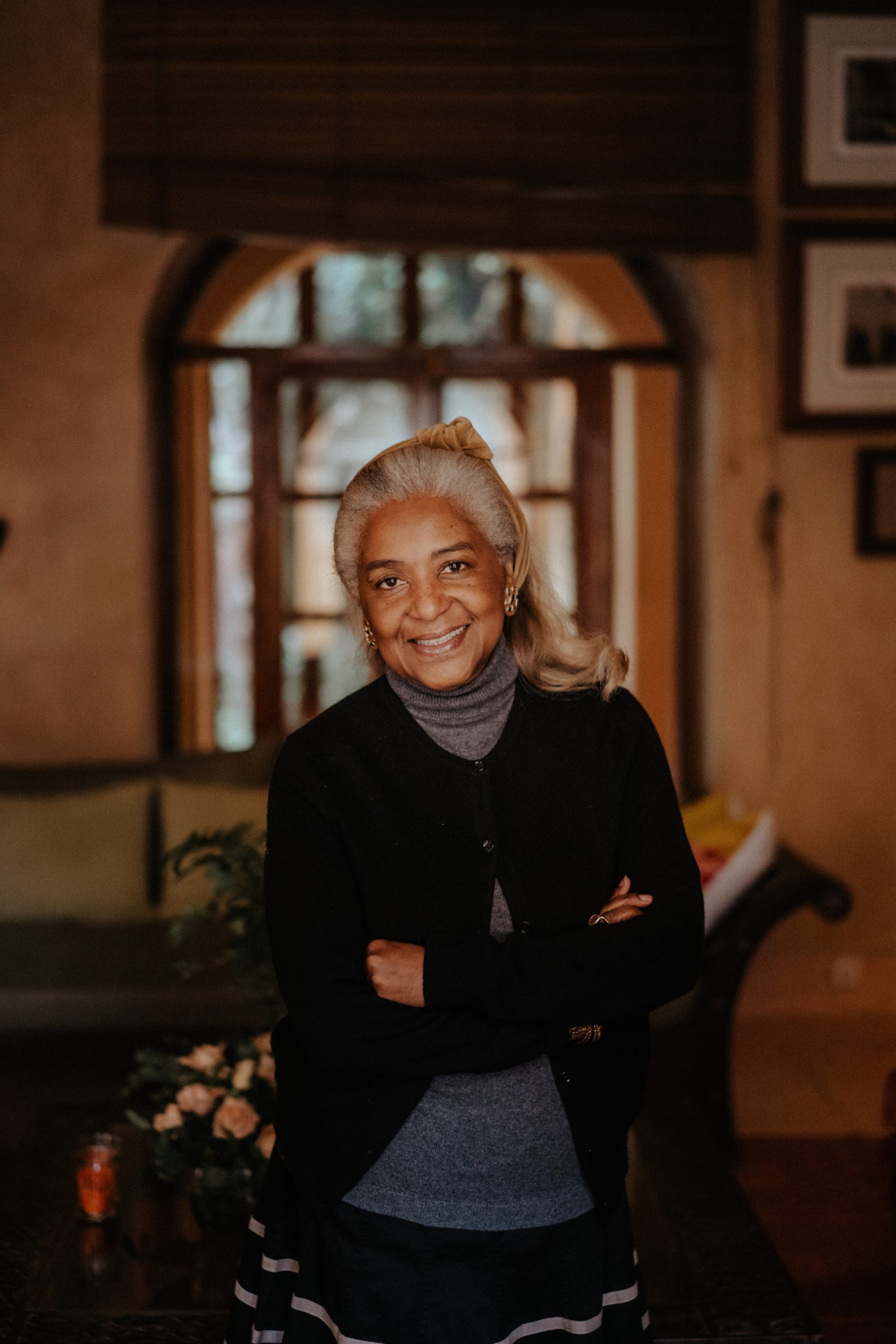 Meryanne Loum-Martin, the only black female hotelier in Morocco, describes herself as a citizen of the world who moves easily between different cultures and interests in life. From architecture to art and design, business to marketing and strategy, and politics to social and cultural issues. Meryanne Loum-Martin, the owner of designer boutique hotel Jnane Tamsna, is our Cover Queen for the month of February. She is a phenomenal connector with a heart for promoting a distinct culture and lifestyle. Read and be inspired by our Q&A with her!

In your words, how would Meryanne Loum-Martin describe herself? Probably a citizen of the world, moving with the same ease between different cultures, and different interests in life, from architecture to art and design, to politics, social or cultural matters, from business to marketing and strategy.  Someone who -thanks to an extraordinary mother- was aware of things very young and who could absorb and analyse the incredible diversity of life and experiences at an age where most children live in a bubble. I believe that fusion and layers enrich life. For example, I have a hotel, but for now 30 years, I have been into creating experiences. Selling room nights was just a means to create the product. I am thrilled that now everyone talks about experiences in the tourism industry. Because on my small scale this is what has always made my places different, we could create a unique experience. My places have always been like a creative salon, where guests could meet fascinating people and be part of brilliant conversations if they wished. Honestly, I don’t know how this has happened, but this is the fact about staying at our place. It might be because of the architecture I designed, which makes people feel that they are part of a house party, even though they have all the privacy and space they wish when they want.

So I would describe myself as someone who follows her instinct and offers a particular lifestyle as a job. I do things differently because I am different and we are different as a family. The paths of life have turned me into a connector and a cultural promoter.

What inspired the name of your hotel – Jnane Tamsna?  My first project in Marrakech was called Dar Tamsna, it became the place to rent. I opened in 1989, the concept of boutique hospitality did not really exist and these 2 words were not put together: “boutique and hospitality”. Dar means house in Arabic and Tamsna was the name of a nearby village. To my astonishment, it was not only constantly packed, but our clientele was Brad Pitt, Mick Jagger, David Bowie and Iman, Peter Lindbergh for his most famous Vogue shoots, Giorgio Armani on private family holidays then shooting his Haute Couture book there, European Royals, Top French CEOS, Missonis, Bucellatis, Pirellis, members of the Vanderbilt ad Carnegie families, etc… It took some very connected people to come and spread the word among their circles that there was a place in Marrakech that “really got it”.  Dar Tamsna was like they say “very famous to very few”.

Then I did Ryad Tamsna which was a cultural concept store in the old town of Marrakech. It opened at the same time as the Aman Resort in Marrakech, called Amanjena. The Amanjena director then said that Ryad Tamsna was the only place with the standards and quality expected by their type of clients. Again Ryad Tamsna did very well. So the word “Tamsna” became my brand. When we decided to have a hotel of our own, my husband who is a brilliant botanist, looked for the name garden in Arabic. It is Jnane. I wanted to be my own architect from A to Z and that the buildings would be designed as a dialogue with nature. My husband was going to design the gardens and I was going to create an architecture that would integrate his gardens. It took me 2 years to look for land, it was never right. For two years, we were saying, “one day we will have a place and we will call it “Jnane Tamsna”. Then one day I bumped into where we are now. When I went to the deeds office to finalize the legal change of property, I was asked by the employee “What will be the name of your property?” I said Jnane Tamsna. The employee responded, “this is not what I am asking, I am asking, how are you going to call it?” I repeated Jnane Tamsna. With a sigh, the employee then said,” So you don’t know that this has been the name of this land forever?”

Can you tell us about the biggest obstacle you have faced so far in your life’s journey, and how you overcame it? I have not yet overcome it. It is raising capital. I have a remarkable project in the pipeline, the best team, and a concept that would really enrich the path of tourism on our continent. A total game-changer. I am looking for investors.  From day one, when I opened my first place in December 1989, I have been a pioneer out of the blue. Again in 1999 and again in 2001. It is time to scale up and do meaningful work connected to creating sustainable opportunities for local populations at a wider scale. My concept uses luxury to leverage development in a way never applied before. So as long as I have not started this project, I have not overcome my biggest obstacle.

In the recent times of Covid-19, Omicron, and other variants, how have you been able to maintain the hotel business? Innovative management of the cash flow,  Selling future events which needed to have dates confirmed and closed to sales even 2 years before. The local government supports small salaries as well.

Also, we have a very loyal clientele and they have been very supportive, offering to pay part of their holidays in advance, even when the dates had no visibility. They have all our gratitude for their understanding of how key it was for some businesses to find ways to stay alive.

But it is time now to re-open for business!

In those moments when you feel like throwing in the towel, what motivates you to keep going?  Knowing that things are not set in stone. I went through September 11th, 2001, the biggest shock I ever had, then through the international financial crisis, and several other setbacks. So as difficult as Covid’s impact was and continues to be, I have never lost the sense that things will end up getting better. On another side, I count my personal blessings… a very stimulating family, inspiring, creative, and with whom intellectual challenges and conversations are a constant support. Honestly as tough as it has been, I never felt like throwing in the towel… Far from it. It has given me the energy to fight and create a better Jnane Tamsna experience.

If you could go back in time, what is one piece of advice would you offer a younger Meryanne? Think big sooner.

In life, who inspires you and why? Even though there are indeed amazing people whom I have never known or met who could be an inspiration.  I am lucky to have phenomenal people close to home

My great-great-grandfather was born enslaved. Freed at 16 years old in Guadeloupe. A great farmer who had the intelligence not to move to the city once free, but to stay on site as a paid worker where he was superbly skilled. He went on to buy back years later, the property on which he was born. After moving to the big house, learned how to read and write. In one generation, his son my great grandfather became a French lawyer and was elected at the French Congress in Paris.

His daughter, my grandmother spoke to French Congress (in front of about 600 old white men) when she was 22 and obtained what she was publicly asking. The event was covered by all of the French press in the early twenties, on the front page, a young Black woman speaking at the French Parliament. Her younger brother, coming out of the best medical internships in Paris, had an incredible and heroic life as a Black French surgeon in a Nazi prisoners camp. These are the people I admire most, my own blood on my maternal side. People who never took no for an answer and were always at unexpected places. I realize that I am extremely lucky to have access to all these press clippings and the archives of the French Library of Congress to find a very motivating and personal inspiration. It is true that when I could get stressed about some business matters, just thinking about them is a phenomenal booster.

What are the top 3 impactful things you have done/achieved in the past year as concerns empowering women? I am totally into creating my new project and this will be the best platform to empower women in rural areas in a sustainable way which will change the future of their families.

What is your take on “women supporting women”? I think that this is “key”. A network of well-intentioned women with heart and brains mentoring the next generation. It is not always easy though. Let’s not be naive. But in an ideal world, women’s mutual support is a powerful win-win situation. I am 100% for women supporting women.

What are some business lessons you’d like to share with our readers? It is difficult to have general rules, each business might have its own scope of lessons.

What is one bad habit you are committed to changing? I need to take better care of myself. Exercise, eat well, sleep more and stop micro-management as my family would tell me.

Time Travel or Teleportation? Both for me. Shared life experiences will not happen on zoom. We have learned to appreciate both and need to optimise both.

That I set up a new model of tourism which changed the lives of unprivileged women once for all. And that it will inspire a lot of people to do the same.