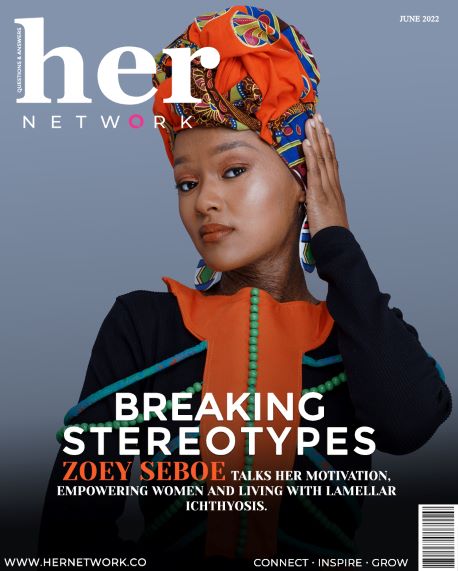 Persevering, determined, and motivated are some of the words that best describe Zoey Seboe, a 22-year-old rare gem. She was raised by her grandmother, aunts, and uncles in South Africa. Zoey, who is currently a model and in her final year of an undergraduate Bachelor of Commerce in Law degree at the Eduvos Institute, grew up in a time when getting matriculation and then a job was considered sufficient for a woman. Despite the cards life dealt her at the time, and her conviction that her fate as a woman had already been decided, she was adamant about breaking free and doing better.

Zoey’s skin condition, Lamellar Ichthyosis, influenced who she became, allowing her to grow beyond preconceived notions about the people and environment in which she grew up. She considers success to be a two-edged sword; whether good or bad, the goal of that particular accomplishment will have taught you something and helped you grow as a person, allowing you to either obtain or let go of something.

Read our Q & A with her and be inspired!

In your words, how would Zoey Seboe describe herself? Persevering, determined and motivated.

Share a little bit about your background and the influence it’s had on who you have become today. My grandmother, aunts, and uncles were the ones who raised me. I grew up in a place where getting matriculation and then a job was enough. I knew it would happen to me someday but my willingness to do better, and God’s hand both, have surpassed my hopes.

Even though my skin condition influenced who I am today, assumptions about the people I grew up with and the environment in which I grew up, shaped this person to become a better version of herself every time she takes a step forward.

Can you tell us about the biggest obstacle you have faced so far in your life’s journey, and how you overcame it? I was turned down for practically every casting I went to in the modelling profession. I had to learn patience and be reassured that this was not a reflection of who I was. Rejection shaped me into the determined woman I am today and each time I encounter rejection, it strengthens my determination to succeed because it reminds me that rejection is not a reflection of my self-worth.

Not so many people know of or speak about Lamellar Ichthyosis, can you enlighten our readers a little bit based on your personal experience (Being aware of the condition and living with it)? I was born with a skin disorder that is nearly unheard of. Only one in 100 000 people have lamellar ichthyosis, which causes the skin to shed after a certain period. But rather than being discouraged by this difference, I chose to embrace it. It was unique and I thought ‘wow I must be really special and certainly here on this earth for a reason. However, growing up with such a rare condition was not always easy. Strangers gave me odd stares. Sometimes I would just stare at them back and smile because of who I am but then there are times when that confidence disappears for a while and insecurities kick in. In those times I just have to remember who love who I am and have positive talks with myself.

In those moments when you feel demotivated (because those moments come), what motivates you to keep going? I remember my grandmother and, if you believe in God, I remember that no matter how hard it is, those moments do not go unnoticed by him nor is he sleeping. I turn to prayer for motivation and direction.

If you could go back in time, what is one piece of advice would you offer a younger Zoey? Relax. Take a breather and leave the rest to God. Things will not always go as planned, but that is only because there isn’t always a straight path to follow. Know that it must curve in order for you to discover how God works. So be gentle with yourself and remember that once you’ve overcome, you’ll feel more confident.

In life, who inspires you and why? My grandma inspires me by the way she lives and prays, even when her strength fails her. She always makes it a point to pray, regardless of the situation. And she always expresses her gratitude and thankfulness by saying that no matter how badly you think people have treated you in life, remember the good they have done for you, as God will undoubtedly reward them because he has been with you.

What are the top 3 impactful things you have done/achieved in the past year as regards empowering women?

What is your take on “women supporting women”? In a society where one may argue that women supporting women is important because they understand, one could wonder why they struggle so much as beings who should know better than anybody else. You know, women have so much power within themselves because they have been blessed with the ability to see beyond what is present, so imagine what happens if every woman realises this and taps into it, forming a force of explosion that can either uplift or destroy. Women must co-create so that they can raise each other up and be a bastion of strength for one another.

What is one bad habit you are committed to changing? Procrastination

What would you like to be remembered for? Someone who lived, loved, made others smile, touched people’s hearts, and helped where help was needed.