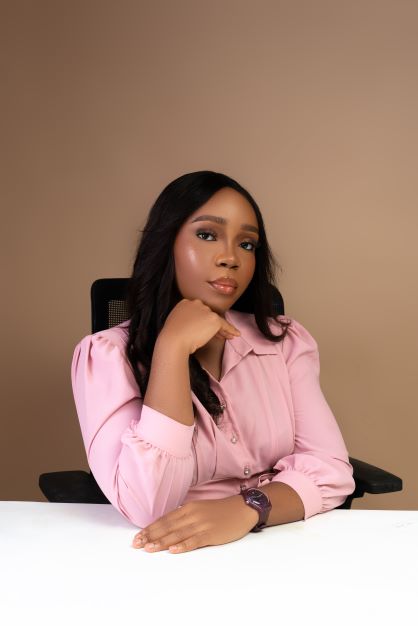 Chisom Nwokwu ( fondly called TechQueen) is currently a Software Engineer based in Lagos, Nigeria, who works with the sustainability team at Microsoft to help achieve its company-wide goal of becoming carbon negative by the year 2030.

She graduated in August 2021 from the University Of Nigeria, with a B.Sc in Computer Science right after rounding up her internship with the Bank Of America, where she worked as a Technology Analyst

She recently released a book titled “A Techie’s Guide into Big Tech Companies” which serves as a complete roadmap for landing roles at international tech companies.

As someone who has made tremendous progress in a short period of time, she got nominated as a “RISING STAR OF THE YEAR” by the Women Tech Network and the She Code Africa Organisation   Asides from engineering and with over 50+ speaking engagements, Chisom spends her time helping people build early careers in tech and land roles at top tech companies through speaking engagements, twitter-spaces and 1: 1 sessions.

When she isn’t doing anything technical she loves doing 3 amazing things, cooking, playing the violin and helping people be their best selves. Read our feature with her and be inspired.

Her Network: How did your interest in tech begin?

Chisom: I’ve always had a thing for computers since I was a kid; my parents were always giving us gadgets because they knew about technology and would buy the best gadgets for my siblings and me. So I recall my father bringing home a desktop computer, which at the time had various components ranging from the mouse to the CPU and everything in between. It piqued my interest, so we were given the opportunity to explore our latest gadget at the time, a desktop computer. I remember playing several games and doing numerous interesting things on the system, which piqued my interest. The fact that you can create so many things on one device was one of the things that was inspiring to me.

We also had an after-school computer tutor. That is where I believe my interest in technology began.

Her Network: Share a little bit about your experience with mentorship when you decided to take your journey into the tech space seriously.

Chisom: My mentor at that time was also a student in school who I met at an innovation hub which was in our school at the time. The hub was where all the techies go to code, network or host tech events so in my third year, I walked into the hub and saw a lot of tech guys doing great work in different areas. Some were developing websites and others were developing mobile applications so I walked up to one of them and saw that he was developing a mobile application on his laptop. I found it fascinating to see that the applications we see on the mobile stores are actually built from scratch by people like him. I asked some questions and he explained the process including the role of a front-end and back-end developer. And even though at that time, web development was common, I was particularly interested in mobile apps and being a mobile application developer so he showed me the ropes, supported me with resources, and guided me through the app-making process. There were days when I felt discouraged thanks to the grueling aspect of developing a mobile app and I would have conversations with him about my struggles, he used to really encourage me then and say things like “A few years from now, you’d look back and appreciate the process.”

He literally help my hands for over six months while I worked toward strengthening my skills and building my confidence in mobile app development. I eventually got to the point where I built my first application. I really just wanted something I could call my own and has my name on it and that was how I launched my first app thanks to his valuable mentorship. So mentorship is something I’d always advise people to go for if they have the opportunity to find a great mentor.

Her Network: Speaking of your app “Igbo Amaka”, how did you decide that you were going to create an app and what was the app creating process like?

Chisom: The app is something I’m really proud of and never envisaged how big it will get when I created it. In fact, when I first launched the app, I used to track the downloads and all which was not so much and kind of discouraged me so I stopped tracking it for a while and the next time I thought to do a check just to see the numbers, there were over 10,000 downloads globally. Now let me explain how this app was birthed, there was this tutorial that I was using while learning mobile app development and they had a language app but the language was not what I was used to. So I was inspired to make my own but transform it and do it in my native language, Igbo. It’s worthy noting that at that point, I didn’t know how to speak Igbo but I figured it can also be a learning process for me to build my Igbo language muscles as I create something others can find valuable.

I added numbers, alphabets, names of family members, Igbo sentences, and a whole lot of things including the Igbo culture. Now to make it even richer, I decided to add voice to it to help with pronunciation and what did I do? I got my mother to help me with the voice-overs and she was more than happy to support me and lend her voice to the platform. After that, I compiled all the components into the app, did a little UI work, did my due diligence, got friends and family to get the first experience so we can make adjustments where necessary, and then, went live. This is how was birthed.

Her Network: You recently wrote a book titled “A Techie’s Guide into Big Tech Companies” which serves as a complete roadmap for landing roles at international tech companies. What inspired this book?

Chisom: I’ll start by sharing what prompted me to write the book. When I received my Bank of America and Microsoft offers at the same time, I shared the news on social media, and the response was incredible; people who had been following my journey were curious to learn how I landed two incredible offers. I discovered that, while there were opportunities to get into these companies, people (particularly those in these organizations) were not very vocal about the various opportunities available, so I decided to leave the door open when I got in by sharing information and being vocal about how they, too, could get into these companies. After much thought on what medium was best to communicate and share information, I decided to write the book. In April 2022, I began writing the book, which included advice on personal branding, social media portfolios, and even how to apply for these jobs, prepare for interviews, negotiate, and more. The book is value-packed because it includes my personal stories, mistakes made, and lessons learned, as well as impact stories from other top-tier professionals currently working across various high-level companies.

I also included an interview journal to encourage people to self-assess after interviews and journal their experiences, as these things will be beneficial in the long run. If you get the job, you can always look back and see what you did right, and if you don’t, you can look back and see what you did wrong and correct your mistakes before the next interview. I’m very proud of this book and can’t wait for everyone to get their hands on one.

Her Network: Share some words of encouragement for the young women in our community reading this right now.

Chisom: Don’t let anyone tell you that what you’re about to do is bigger than you and don’t be afraid to make mistakes.