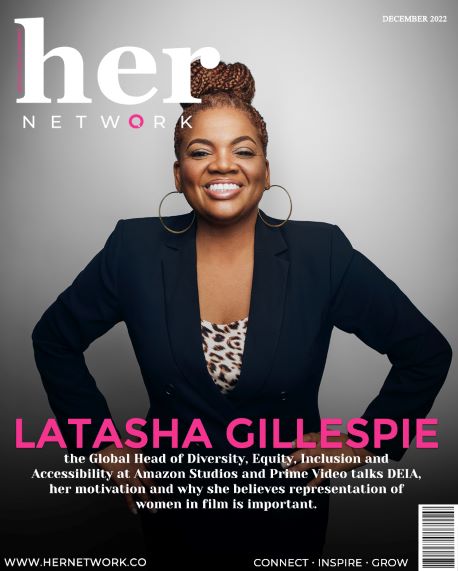 Latasha Gillespie is the Global Head of Diversity, Equity, Inclusion and Accessibility at Amazon Studios and Prime Video, where she creates mechanisms to improve the diverse representation of talent (both in front of and behind the camera, above and below the line), breaks down longstanding barriers to success in the entertainment industry, and helps tell inclusive stories that are accessible and marketed to a globally diverse audience.

Gillespie has a diverse range of experiences from all over the world, with Finance and Human Resources being two of the most important aspects of Gillespie’s professional journey. They are solid foundations she credits for preparing her for her current role.

Gillespie describes herself as “God’s favorite child” in conversation with Her Network, and then as a leader given the opportunity to lead as an executive head in a top global organization. She begins to talk about her role and the importance of DEIA, emphasizing her incredibly diverse team of handpicked, capable individuals who are valuable assets on the job. “Knowing that what I do has an impact on the lives of the people I work with, our customers, and the organization, is a blessing,” she says. Read our conversation with her below and be inspired.

On what served as the catalyst for the adoption of the Inclusion Policy and Playbook at Amazon Studios.
Gillespie has served in her current role at Amazon Studios for 4 years and counting and is most proud of the company’s adoption of an Inclusion Policy and Playbook, a resource Gillespie and her team created to ensure that every series or film presented has adequate representation by outlining guidelines and expectations for producers.

Progress in inclusion and diversity has been evident since the adoption of the Inclusion Policy and Playbook at Amazon Studios. Lead roles for women of Color doubled since its implementation, with significant increases across women of Color creators, writers, and directors. Gillespie’s pride in the accelerated growth of numbers is evident as she mentions that the figures will continue to rise year after year.

“I never want money to be the reason we don’t do the right thing.”

Gillespie’s background in HR has helped and prepared her to effectively lead as the Global Head for Diversity, Equity, Inclusion and Accessibility. She credits the knowledge and skills gained over the last 20+ years of her career working in Finance and Human Resources for how she understands people and works efficiently with her team to deliver robust impactful projects that have a positive impact on the bottom-line of the business.

On what she’s most proud of.
Gillespie states that Amazon Studios is the only studio in Hollywood that includes diversity and inclusion in the Green Light Assessment. “When you bring your film to us and we agree to make it, we ask ourselves, “Will this make us better or worse?” Then we ask ourselves, “Is her film going to help us reach an audience that we have historically not been able to reach” Are people who look like her going to be able to recognize themselves on the screen, and will the story resonate with them in an authentic way? And the last thing is, is there anything in this film that could potentially cause harm?’ Because we all know that negative stereotypes and troupes still exist in films and television shows today. So we ask, “Is there anything in here that could cause harm, and if so, how can we change it?” ‘How do we fix it?’ My team then provides you with the resources so you don’t have to worry if it hits your budget. Because I never want money to be the reason we don’t do what’s right.” She says.

On what motivates her to consistently show up and be at her best.
Gillespie acknowledges that the work can be challenging, especially if you wear a marginalized identity. “As a black woman, I understand this not just professionally but personally. And it’s like when you do this work, it almost feels like you’re defending your own humanity. And that could get heavy and I have to watch out for my team as well because many of them wear different marginalized identities. That’s why I’m always worried about their well-being as well because it does get heavy when you do this work.” She says.

Gillespie shares that, despite the challenges of the job, the thing that keeps her going, that keeps her getting out of bed each day, is a constant check-in with herself, where she asks herself, “Are you still able to carve out a small corner of the world and make it better for a few other people?” She can get out of bed every day and be her best as long as the answer remains yes.
As she speaks, she recalls an incident a few days prior to our conversation in which she reconnected with a young woman who had benefited from her first Howard entertainment class.

Gillespie began a program in 2020 in which she brought black students from Howard University into Amazon studios for two semesters to learn about the academic side of television and film. Students were taught by Howard professors and Amazon executives, and they were also given the opportunity to earn money while working during the summer. Gillespie prioritized the impactful outcome of their enrollment by covering their tuition for two semesters, housing, and providing a stipend to support their day-to-day because she didn’t want them to be burdened but encouraged them to focus on what was a very rigorous program.

“Are you able to carve out a small corner of the world and make it better for a few other people?”

On Some of the Lessons Learned
“DEIA can feel very personal and it’s easy to take offense when someone doesn’t see, understand, or value the work the way you do. Corporations are in business, and they have to be in service to their shareholders, their customers, and themselves, or they don’t exist,” she says, “and I’ve learned to understand that not everything is personal, and some things are just business.”

“I’ve learned to understand that not everything is personal. Some things are just business.”

One of the many ways Gillespie wields great influence at Amazon Studios, using this model to remain equitably customer-obsessed, is by tying the value of inclusion to the things that matter to the business.

Her fulfillment stems from knowing that she is raising the next generation of studio executives who are diverse, equitable, and know how to do it right. The brightest minds will change the industry and continue to give back.

“My job is to entertain you but if I do it well, it will also increase your humanity.”