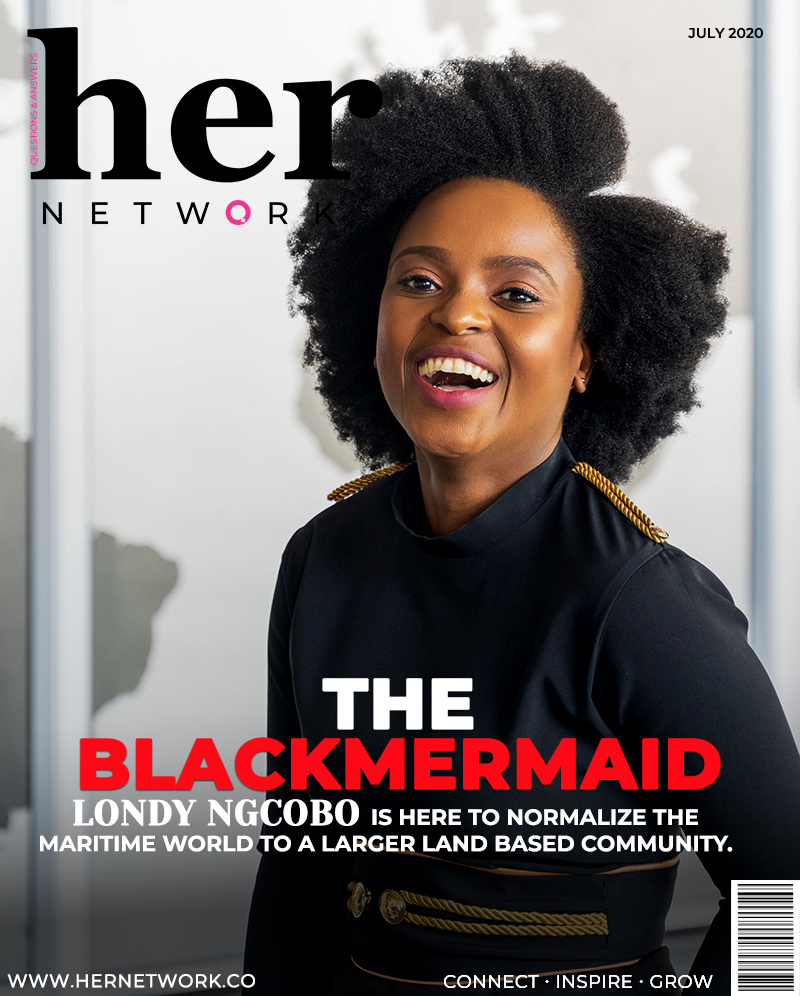 A Global Ship Navigator and Africa’s First Female Dredge Master. Londy Ngcobo is passionate about unlocking Africa’s ocean economy. With over 13 years of experience in the Maritime industry, her background includes Maritime Studies, International Merchant shipping experience, Advanced dredging from the Netherlands IHC, an industry shaking role as a former Maritime Compliance Manager for Transnet National Ports Authority, Founder of Global Maritime Youth and Chief Executive of Womaritime Experts, a consulting firm in the shipping industry. All which has led to her well known title “The BLACKMERMAID”.

Who is Londy Ngcobo?
Londy is short for Londiwe meaning protected/saved, im from Durban, South Africa. I grew up in a small township and got introduced to travelling at the age of 13 when I became an exchanged student to Leeds in the UK, with little spoken English but I remember being very happy and made a lot of friends. Coming back to complete my high school in SA I was introduced to Maritime Studies and got intrigued by its uniqueness, little did I know what a unique twist it will bring into my life. I further did maritime studies in varsity until I got hired by the largest container shipping company Maersk.

What do you consider your greatest achievement in your life so far?
The stereotype associates a Ship navigation officer with a Captain Philip image, and if you put a female in the picture you imagine Rose from the Titanic. For me, being a ship navigator and further becoming Africa’s first female dredge master is a title I hold very dear to my heart, one that also leaves me with a lot of responsibility for the next generation, and most certainly one that challenged the status quo.

How did your journey to becoming the First Female Dredge master start?
I got my first license to navigate ships while I was with Maersk shipping lines, after several ships back and forth sailing globally and that’s where I earned the Blackmermaid nickname. But a call for change hit me hard after a few years and that’s when I joined Dredging Services a shipping company back in Africa, where I obtained my second license and that’s when I landed the title, which was followed by a lot of noise by the way, completely deviating the focus of what being “first” meant to our continent something I have strongly emphasized on my Tedx talk “anchors aweigh, no rest for the first”

You are very passionate about unlocking Africa’s Ocean Economy. Give us a few steps you have taken so far towards achieving this.
Many awards and accolades later the responsibility to multiply is still my core purpose on clear voice through various platforms I am able to reach, this has given birth to the Global Maritime Youth foundation, enabling an African child from a skill as neglected as swimming all the way to becoming industry Captains and leaders. Being Africa’s maritime advocate also gave birth to Womaritme Expert consulting, driving diversity and inclusion to shipping companies. Furthermore, I sit in various boards to drive the ocean economy agenda as mandated by the international maritime organization.

What’s a week in the life of Africa’s First Female Dredge master like?
We stay onboard for months, maximum 4 months, min 1 month depending of shipping companies. Over and above navigating a ship, generally a Master/Captain is charge of various departments on-board the ship i.e. the engine room that is headed by a chief engineer, the galley that is headed by the head chef, the captain has overall authority of the whole ship and all activities associated with the smooth running of it .

What/Who inspires you and why?
I’m inspired by the African women evolution, witnessing how African women have come to embrace their natural beauties is unsaid, I share this in relation to the experiences of African female seafarers have had to endure in the maritime industry in a Forbes Women Africa monologue I recently delivered. I’m also inspired by Chimamanda Ngozi Adichie and Brene brown.

What advice can you offer to young women looking to be as bold and fearless as you are, Charting an unpopular career part in this part of the world?
A black child needs not to be associated with that which cannot relate to the ocean no more, who would have shifted the role of Rose a young woman simply in love with a charming man in a cruise ship called the Titanic to that of a whole Captain? Those days are here now. Furthermore, a black child needs to stay reminded that as we continue to engage in land compensation negotiations as Africans, the ocean also belongs to all of us and yields unsaid opportunities for the taking who would have imagined ship ownership from Africa back in Jan Van Riebeek days? Those days are here too.

What is the most important life lesson you’ve learned so far?
I’ve spent years apologizing and seeking validation from streams that have no business affirming me for my hard work and talents that God has afforded me. The process has costed me and those I’m called to serve a great deal of time. I’m now 33 years old and finally getting to dance to the rhythm of my own words and ideas, I’m now intentional in exploring all that is meant for me, GUILT FREE!

Where do you draw strength from when you are not feeling particularly happy?
At home with my husband and 4 year old Afro princess is where I’m most alive, we could be in the same room or I’d be alone meditating and connecting to a higher power that is bigger than myself. I always feel liberated after a good meditation session. The notion of a meditating blackmermaid alone is quite a force in itself….haha

What is your take on “women supporting women”?
We are not there yet, not in boardrooms nor on stage. This is based on my own experience. In most territories, women will attack your position and integrity first and then figure you out later. We seem to be trying to prove our capabilities less to men and more to the other woman inside the boardroom because that’s where a real competition SHOW lies, I still find. We are just not there yet. But baby steps.

What would you like to be remembered for?
Simply a friendly Blackmermaid that came on land to normalize the maritime world to a larger land based community.

More About Her
This Black Excellence award-winning Woman in Scarce Skills serves on various boards in the transport sector and influential organizations within leadership, women and youth spheres ensuring continuous development of Africa’s transport professions through advocacy, training, and awareness as well as strengthening the competitiveness and employment creating potential for Africans.