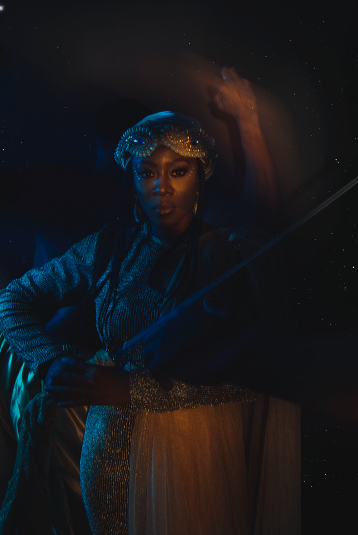 Lucy Ameh is a producer and actor. She is from Benue State, however, she was born and raised in Kaduna, Nigeria. Ameh has a BSC in Mass Communications from NTA TV College Jos, which is connected with ABU Zaria, as well as a diploma in Law from the University of Jos. She has been in the film industry since 2007 and has appeared in a number of television programs and films, including Tinsel, Ajoche, Living in Bondage, Swapped, and, most recently, Queen Amina, which was aired on Netflix and in which she portrayed the lead character. In our interview with her, she discusses her journey to becoming Queen Amina, her challenges, and much more.

Q: Tell us a bit about yourself, what was it like growing up in Kaduna State and what are some of the things you were involved in before going into acting?

A: My name is Lucy Ameh, I was born and bred in Kaduna state, We are four children in my family but I am the third. I’m from Benue state in NIGERIA, I attended federal government college Malali Kaduna, I have a diploma in law from the University of Jos and a BSc in mass communication from NTA TV college Jos affiliated to Ahmadu Bello University Zaria.

I went into acting after secondary school when my mother registered me in an acting school in Kaduna, then it was just me starting out and learning the ropes, and after which I gained admission into the university and I went to school but was doing it on the side, professionally I started about 10years ago, I was never really involved in anything other than filmmaking.

Q: What made you take up the lead role in the Queen Amina movie? There is some criticism about the role being played by a non-Hausa indigene and you are originally from Benue State. Is there a backstory to this?

A: I took up the role, first because am an actor and secondly because it’s a big project and I knew I will be working with the best of filmmakers, the character AMINA is someone who since I was little I was taught about her history in primary school and secondary school and also as a folktale, I just felt it was an honor to tell the story about the legend AMINA and it’s even a greater honor to play the character AMINA.

If a lawyer who is an actor plays the role of a lawyer in a film that actor is interpreting what they do in real life, that I am from BENUE doesn’t deprive me of the fact that I am an actor and actor’s job is to play and fit into different characters and in so doing delivers as though it’s their real life, I playing AMINA and depicting a character is what makes me an actor, moreover, I’m a northerner by birth? I was born, bred, and raised In Kaduna, the Actual Queen AMINA of ZAZZAU is from Zaria in Kaduna state.

Q: When you suffer a setback, how does it emotionally affect you and your work? How do you handle it?

A: As humans, setbacks can come in many ways, and we are expected to bounce back from every setback without allowing them to weigh us down.

When I suffer setbacks sometimes I cry and then I start all over, most times I just start, after kneeling in prayer to God to see through and give me the strength to bounce back. I actually don’t let anything affect my job, no matter how bad the situation, I always try to do my work right, and then afterward I fix my problem also Looking at the future and looking at the goals I set for myself, looking at the directors and producers who believe in me and all of the people (fans and family and loved ones) who have been supportive through my journey and then I encourage myself and I draw strength from all these I have mentioned.

Q. How do you like to encourage ideas in others, especially those who want to go into the entertainment industry?

A: First Go to school and at least have a Degree,  the industry will remain here whenever you are absolutely ready. Just believe in yourself, do not let anyone tell you you can’t do it or you are not good enough, work hard, study about the job, be focused, be determined, be attentive, be humble and be consistent, never give up, you are your only competition, and you have no limitations. Go out and Shine, the sky is big enough.