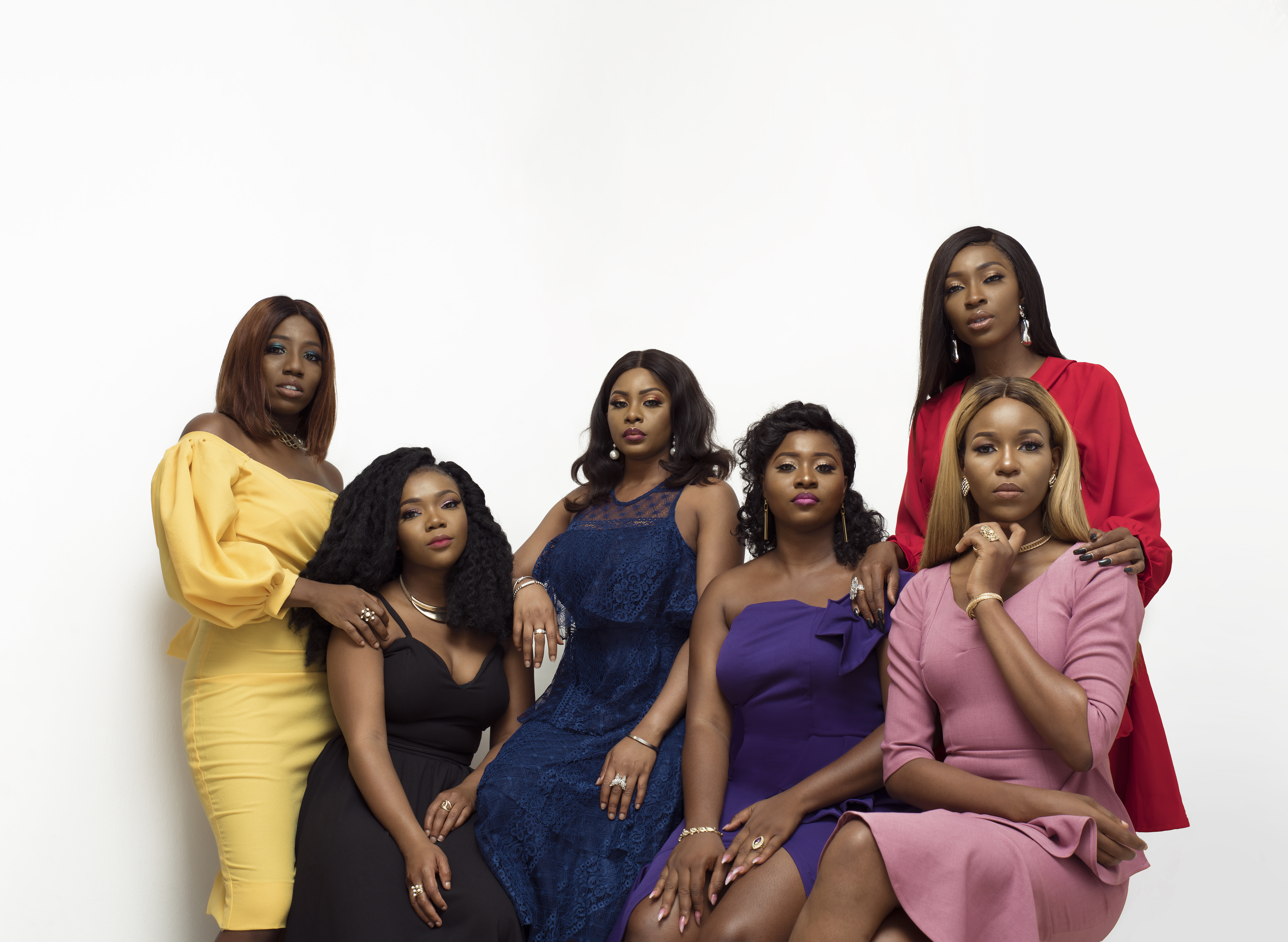 One would think that Nigeria’s societal views on women assuming leadership roles would not be a cause for celebration but it’s 2019 and a woman is yet to be considered by a leading political party for the highest seat in the nation, the presidency. Dame Virginia Ngozi Etiaba became the Governor of Anambra State from November 2016. Her instatement was as a result of an impeachment of the previous governor, Peter Obi, for alleged gross misconduct. An unmarried woman, in most cases, would not be able to find an apartment in Nigeria today except accompanied by a man. These paint a picture of how far we have come as a society and how far we still need to go.

Ajifa Joy Atuluku, Oluwaseyitan Atigarin, Engr. Precious Odiase, Abimbola Asegbe-Odubajo and Bamidele Sogbesan are all producers who have one thing in common: they are the all-female production team at Arcadia Premium TV, a cable TV platform that produces, distributes and transmits developed content for the purpose of entertainment, advertisement, publicity and live event coverage.

Arcadia Premium TV will officially launch on Startimes with original African content and these are the women making things happen behind the scenes.

Ajifa Atuluku is the Head of Production – overseeing all the stages of production from pre to post production – at Arcadia Premium TV, leading a production team that produces original African content. She is a television presenter, producer and production consultant.

Atuluku has 7 years of experience producing engaging content for local and international media organizations. From 2011 to 2012, she presented and produced The Breakfast Show which aired on HITV Nigeria and Sky 204 in the UK. Between 2013 and 2016, she presented and co-produced the popular lunch-hour TV show Entertainment Splash on Television Continental (TVC) with an estimated reach of 7 million viewers nationwide; She was nominated for TV Presenter of the Year at the Exquisite Lady of the Year (ELOY) awards in 2014.

In 2018, she officially launched her production company Ajifa Atuluku Productions now JAYSA Studios. Atuluku produced and directed 5 advocacy videos (2 activism videos, 2 short films and a documentary) to combat tribalism in Nigeria, in collaboration with the Ford Foundation. She features on Moving up the Squad, a reality TV show and is a regular commentator on Men’s Corner, an Ebonylife TV flagship show that focuses on social issues.

Outside media, she is a Dancer and choreographer who recently created her own dance workshop called Dance with Ayjay where she teaches Afro-hip hop dance routines.

Oluwaseyitan Atigarin is the producer of Serious Banta & Sensei’s Corner on Arcadia Premium TV, she is also the TV’s presenter on Kitchen Dash and Live on the Red carpet.

Before her time at Arcadia Premium TV, Atigarin earned her Masters’ degree in International Broadcast Journalism at Birmingham City University. She also had a brief stint working at ARISE TV London as the news intake manager.

In 2014 her career kicked off, working as the production manager for Playcenter Nigeria on projects such as Dance with Peter, Celebrity Basketball Faceoff and Mavin Access Concert. She became a regular contributor on Ebony Life TV’s Men’s Corner and gained notoriety working at UBA’s Red TV, hosting ‘The Sauce’ – an entertainment and lifestyle show -, and the platforms’ red carpet show ‘Red on Red’. She was nominated in the Best TV Presenter ‘Lifestyle’ & Best Lead TV categories organized by the Nigerian Entertainment Awards and went ahead to win the Best TV Presenter award in 2017.

Atigarin always had a fascination for kimonos and got the inspiration to create her own line of kimonos while recording the second season of Here & Now in Senegal. She launched the debut collection for Abebibytan in Lagos in September of 2017. In March 2019, Atigarin hosted the SME 100 Africa International Women’s Day conference.

Engr. Precious Odiase is currently a producer for Arcadia Premium TV where she puts her skill into producing amazing shows.

Her stellar career started after she graduated from Covenant University with a B.Eng. She studied Information and Communication Technology and moved on to further her education in 2015 at the University of Essex in MSc Computer Networks and Security.

Odiase has over 5 years’ experience lecturing about 1000 Computer Engineering students at the Federal University of Oye Ekiti, where she researched, lectured, and supervised students.  She has also published about 7 papers in renowned journals and has worked for IT companies such as Telnet, ipNX, Hp service center and Zenith Starbright in the United Kingdom.

Odiase is the CEO of a fashion brand called Thamanibyyaya that caters to the modern day woman. In 2019, she emerged top 3 at the VLISCO fashion fund Nigeria 2018 and a first runner up at the Carnico festival.

Abimbola Asegbe-Odubajo is a television producer with Arcadia Premium Television and has over 5 years’ experience in the field.

She graduated from Crawford University with a degree in Business administration. After that, she worked on A Woman’s World and On the Street, both news programs with a strong focus on Women and Youth affairs respectively. Asegbe-Odubajo also co-produced and reported for the groundbreaking breakfast show, Wake Up Nigeria.

Bamidele Sogbesan currently works with Arcadia Premium TV as a Scriptwriter and Producer. She gained passion for the media at the age of 16, and went on to study Film at the University of Southampton. In her First Year, she gained her first professional experience working on the set of Nollywood Direct/Producer’s film, Onye Ozi. During her summer breaks from University, she took up working on short films with friends (Caged), going for screenwriting conventions and seminars. She became a member of Raindance due to this interest.

As a scriptwriter, she has worked on various Films and Television shows, such as Origin, Gidi Cops season 2, Breathe, and many more.

These positions do not come without their challenges. Being a male-dominated industry, there is an issue of being taken seriously as women which prompts them to work twice as hard in other to prove themselves. Ajifa Joy Atuluku over the course of her career has had instances with people who have had issues taking directions because she’s female. On the appointments, Atuluku said, “Inspirational. These appointments are not just for the sake of putting women there. Every single female here is good at what they do. And it’s not just about making content for entertainment but, also, addressing issues that really matter in the society.”